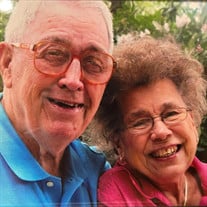 Jack was of the Greatest Generation, proudly serving his country as a quartermaster in the U.S. Navy in the Pacific Theater from 1945 – 46. After returning from the war, he worked his way up to the position on manager at Leggett department store, where he interacted with and influenced employees and members of the community for over 50 years. Jack served faithfully as a deacon and member of Main Street Baptist Church, and was dedicated to civic duties, serving on the Grand Jury and zoning board, and influencing downtown development of Christiansburg for seven decades. He also enjoyed many years of golf and friendship at both Round Meadow and Auburn Hills golf courses.

Jack will always be remembered for his tireless devotion to his wife, children, and grandchildren, his intellect, sense of humor, and interest in his community and its generations of families. He was blessed with the help of loving caregivers Lesley and Shannon, and Kayla and Brittany from Good Samaritan Hospice.

A graveside service honoring his life and military service will be held on Saturday, July 17, 2021 at 2:00 pm at Sunset Cemetery. Online condolences may be sent by visiting www.hornefuneralservice.com.