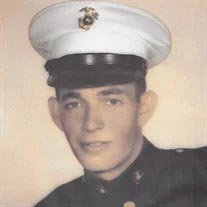 Alvin was a Marine Corps Veteran serving during the Korean War and received the Purple Heart.