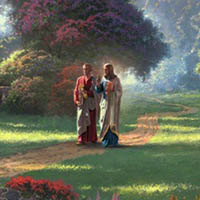 Raymond called and asked Alberta for a date on Wednesday evening, July 2, 2008. She said yes, so he left to meet her at 5 p.m. that afternoon. They planned to go for a walk on the streets of gold and then go to have dinner at the banquet table. They were having such a great time, that he’s not going to come back here -he said that he would just wait with mom for all of us to soon come join them.

Allen Raymond Akers, the best dad, popaw, son, brother, uncle and friend in the world went to heaven Wednesday, July 2, 2008. Raymond was 79 years old and was a resident of Radford. He was a member of the Bain Chapel Pentecostal Holiness Church. He was retired from RAAP and his Belspring Store.

He was preceded in death by his wife, Alberta G. Akers; his parents, Frank Harman Akers and Nannie Linkous Akers; his brother, Clinton (Pete) Akers; and his sister-in-law, Virginia R. Akers.

Survivors include his twin daughters, Rhonda M. Akers and Wanda S. Shepheard; his son-in-law, Tony B. Shepheard; his granddaughter and grandson-in-law, Katie and Timmy Woodyard; his stepmother, Mary Akers Alger; his brothers and their wives, Willard Akers, Robert and Lois Akers, Larry Akers, and Walter and Shelba Akers; his sisters and brother-in-law, Barbara Akers, Sylvia Farmer, and Imogene and Dennis Setliff; his sister-in-law, Alice Akers; his uncle, Charlie Linkous; his many nieces, nephews and cousins; and his many wonderful friends. Raymond never met a stranger.

Funeral service will be held 2 p.m. Sunday, July 6, 2008, at Mullins Funeral Home with the Rev. Jerry Sloss and the Rev. Phillip Martin officiating. Interment will follow in Hickman Cemetery where members of VFW Post #776 will conduct Military Graveside Rites.

The family will receive friends from 6 until 8 p.m. on Saturday, July 5, 2008, at the Mullins Funeral Home. In lieu of flowers, the family requests that contributions be made to the Bain Chapel P.H. Church Building Fund, 4527 Bain Chapel Road, Radford, Va. 24141.

The family wishes to thank Dr. Harry McCoy and his staff and the Hospice staff especially his nurse, Pam.

The Akers family is in the care of Mullins Funeral Home in Radford, Va.