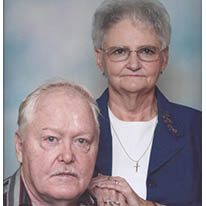 Curley was preceded in death by his loving wife Lorraine Renae Agee, his parents Ray Otis and Margaret Eliza Virginia Agee and his little brother Otis Eugene Agee, as well as his father-in-law Earnest Jones and mother-in-law Omie Jones.

Curley was one of the few, the proud, The United States Marines and for him that was not just a title or a job but a way of life, which he lived proud and steadfast until the very end. Whenever he would meet a fellow Marine, it was always with a loud and proud: “SEMPER FI BROTHER!!”

A lot of words come to mind when trying to describe Curley Agee, but the ones that ring the truest are: Loyal, Honorable, Honest, Caring, Brave, Trustworthy, and Strong….” The list is never ending but the one thing we are certain everyone will agree on is our father Curley Agee was everyone’s friend and would never turn anyone away, he would give all he had to help another person be them friend or foe; family or stranger; if you were in need our dad found a way to help.

Funeral Services will be held Wednesday October 6th, 2021, 6 pm at Givens-Riffe Funeral Chapel in Narrows Virginia. The family will receive friends at the funeral home one hour before the service from 5 – 6 pm