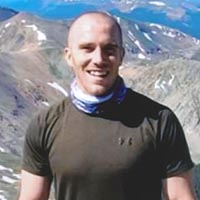 Kevin Scott Adkins, Jr., 26, of Arden, N.C., formerly of Radford, Va., died Tuesday, August 20, 2019 as a result of a climbing accident. He was living in Arden, N. C. with Sable Skewes, the love of his life, and their dog, Maisey. He loved hiking, camping, rock climbing, riding his motorcycle —basically anything outdoors.

Kevin was born October 11, 1992 in Radford. He was a graduate of Radford High School where he excelled in academics and sports. He received his Bachelor’s Degree from VA Tech and was to receive his 2nd degree in December. He was a Senior Associate Engineer with Energy Source Partners.

The family will receive friends from 5 until 7 p.m. on Wednesday, August 28th at the Mullins Funeral Home in Radford. A celebration of Kevin’s life will begin at 7 p.m. with Pastor Timothy Worles officiating.

In lieu of flowers, the family requests that contributions be made to: ATTN: Park Donation, Sequoia and Kings Canyon National Parks, 47050 Generals Highway, Three Rivers, CA 93271.

The Adkins family is in the care of Mullins Funeral Home & Crematory in Radford. www.mullinsfuneralhome.com