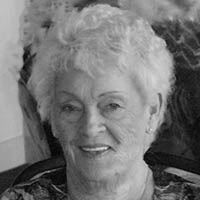 She was preceded in death by her husband, Ernest W. Adkins; a sister, Virginia Gerald Walters; brothers, Gordon Gerald and Shirley Jackson Gerald, and an infant brother, Jake. She attended the New River Valley Community Church.

Funeral Services will be conducted at 2 p.m. on Monday, June 1, 2015, in the McCoy Funeral Home Chapel with the Pastor Mike Neuse officiating. Interment will follow in the Harless Cemetery, Long Shop. The family will receive friends from 5 to 7 p.m. on Sunday evening, May 31, 2015, at the McCoy Funeral Home, 150 Country Club Dr., SW, Blacksburg, Va.