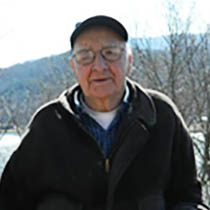 Charlie Wilford Adkins, 91, of Christiansburg, passed away on Wednesday, January 18, 2017.

Charlie was retired from Burlington Industries after over 50 years of service. He was a member of Mt. Tabor United Methodist Church, and enjoyed gardening and chickens.

The family will receive friends on Monday, January 23, 2017, from 10-11 a.m. at Horne Funeral Home. The Funeral Service will begin at 11 a.m. in the Chapel, and interment will follow in Roselawn Memorial Gardens, Christiansburg.

The family would like to thank Tiffany, Tiptoes, Tim, and Jennifer, who were Charlie’s caregivers over the years.