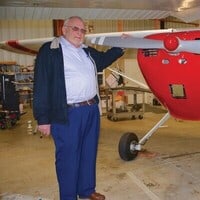 Bobby Ray Adkins, 75, of Dublin, passed away Wednesday, December 29, 2021. He was a member of Valley Harvest Ministries in Dublin and was a retired manager of NRV Airport. He was a U.S. Navy veteran.

Bobby was preceded in death by his father, Dallas C. Adkins; and sister, Barbara Adkins Phillips.

The family will receive friends from 2 until 3 p.m. on Sunday, January 2, 2022 at the Valley Harvest Ministries Church in Dublin. Memorial services will follow at 3 p.m. with Pastor Steve Willis officiating.

In lieu of flowers, please consider donating to your local church.

The Adkins family is in the care of Mullins Funeral Home & Crematory in Radford. www.mullinsfuneralhome.com.