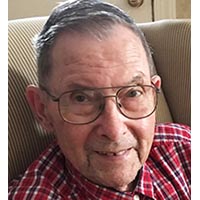 Bob was born and raised in Bedford. He graduated from Lynchburg College following service in the United States Air Force including a year in the Korean War. He began working for VEPCO in Richmond where he met his future wife, Betty. Following their wedding in 1958, Bob and Betty moved to Charlottesville, where Bob began a career in banking and the couple’s three children were born. They moved to Pulaski County in 1967 where Bob managed the Peoples National Bank (later Bank of Virginia) in Dublin for ten years. He spent the next two decades building, managing, and/or supporting a number of businesses including the Steer House restaurant in Pulaski which has been open for 40 years and continues to serve the community today. In 1998, Bob and Betty retired to Bedford.

Bob was known as a gentle man and a gentleman. He gave generously of his time and talents to various churches and community organizations throughout his life and considered his donation of a kidney to his brother to be his most important act of sacrifice. He believed in doing a job to the best of your ability and it showed in his carpentry skills. He had many loves – music, his country, the lake – but his faith, family, and friends were the most important blessings in his life.

In accordance with Bob’s wishes, his body was donated to the Virginia State Anatomical Program for research. A memorial service will be held in Bedford at a later date. Donations in his memory would be welcomed to Bedford Centra Hospice, 1621 Whitfield Drive, Bedford, VA 24523 or Bedford Presbyterian Church, 105 West Main Street, Bedford, VA 24523.