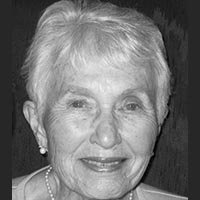 The middle child of seven, Betty was born and raised in Blue Grass, Virginia on Maple Grove Farm and then later in Richmond where she lived with a beloved aunt, Genoa “Jinks” Swecker Slaven. After graduating from Thomas Jefferson High School in Richmond, Betty attended the College of William & Mary. Following college, she worked for Army Intelligence in Mexico City and San Salvador for several years. After returning to the U.S., Betty worked for VEPCO in Richmond where she met her future husband, Bob. Following their wedding in 1958, Betty and Bob moved to Charlottesville, where the couple’s three children were born. They moved to Pulaski County in 1967 where they raised their kids and opened a number of businesses including Maple Garden Apartments in Dublin, which Betty managed for years, and the Steer House restaurant in Pulaski, which served the community for over 40 years. In 1998, Betty and Bob retired to Bedford.

Betty was a lifelong Presbyterian and fulfilled the duties of Sunday school teacher and Women’s Circle leader in various churches throughout her life. Due to her passion for education and reading, Betty was a volunteer teacher and board member for Literacy Volunteers of America – New River Valley for many years. Her childhood love of playing games led to her introduction to bridge in college and she eventually achieved the rank of Life Master in American Contract Bridge. Additionally, she had a keen ability to make everyone around her laugh – whether she intended to or not!

Among her many motherly and grandmotherly expressions of love, proofreading was perhaps her most unique talent. Those of us who knew and loved our sassy little grammarian endured years of her corrections – aloud and on paper. We appreciated her devotion to our language acquisition and promise to pass down all the knowledge she drilled in…er, bestowed on…us. Get your heavenly red pen out, Mom. You can start marking this!

Betty resided at the Bedford County Nursing Home for the last two years, and deepest appreciation is extended to the staff for their loving care. In accordance with Betty’s wishes, her body was donated to the Virginia State Anatomical Program for research. A memorial service will be held in Pulaski at a later date. In lieu of flowers, please consider a donation in her memory to Bedford Centra Hospice, 1621 Whitfield Drive, Bedford, VA 24523 or First Presbyterian Church, P.O. Box 824, Pulaski, VA 24301.