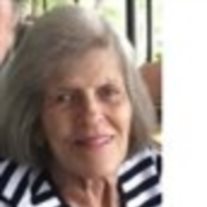 Betty Sue Brannock Richey, Age 79, Tequesta FL. Our sweet Mom and Nanny peacefully entered into the Lord’s presence in the early morning hours of Tuesday, May 6, 2014. Betty Sue and her twin sister Peggy Lou were born in Galax, Virginia on March 5, 1935, to the late Charles and Tula (Combs) Brannock.
Mom grew up in Galax, VA and Winston-Salem NC. She graduated from Mineral Springs High School in 1952, where she always said she was the “baby of the class” because she had skipped a grade and was the youngest graduate. The day after graduation she began her career as private secretary in the insurance firm of Roland “Ring” Pratt. The following year she was a contestant in the Miss Winston-Salem Beauty Pageant.
On October 28, 1954 she married her high school sweetheart, Delford Payne Richey. After his stint in the Navy they returned to Winston-Salem where they both worked tirelessly to put him through Wake Forest University and School of Law. After his graduation they spent a year in Raleigh where he clerked for the N.C. Supreme Court Chief Justice Emery Denny. In 1964, they moved to Lighthouse Point, Florida where Dad opened his private law practice. Again Mom was his tireless helpmate – working in his office as a phenomenal legal secretary while also raising 5 children. Dad often said Mom knew almost as much about the Law as he did because she had been right there with him, helping and supporting him, every step of the way.
Mom lived the majority of her adult life in South Florida, where she continued her career as a legal secretary, retiring at the age of 70. She then moved to Kernersville, NC where she lived for almost 5 years before returning to Florida in 2011. She was currently residing at Tequesta Terrace in Tequesta, Florida.
She is survived by her five children, Cheryl Richey Young and husband Joel, of Kernersville NC, Kathryn Richey Filman, and husband Lew of Stuart, Florida, Robert Richey of Phoenix AZ, Nancy Richey Wrieden and husband Scott, of Jupiter, Florida, and Marc Richey and wife Michelle of Simpsonville, SC; She is also survived by seven grandchildren: Matthew Young of Kernersville NC, Kristina Richey of Ponca City, Oklahoma, Allison & Jillian Wrieden of Jupiter, Florida, and Thomas, Emily, & Tracy Richey of Simpsonville, SC. In addition, she is survived by two loving sisters-in-law, Winifred “Winky” Brannock of Sparta NC and Kathleen Richey of Winston-Salem, and numerous nieces, nephews, great nieces, and great nephews.
In addition to her parents she was preceded in death by her sisters Lorena Brannock, Peggy Lou Brannock, Vera Brannock Galyean, Nell Brannock Holland, Dawn Brannock Cox, brothers Robert Brannock and Harold Brannock and former husband and father of her five children, Delford Payne Richey.
A funeral service celebrating Mom’s life will be held at Snow Hill Baptist Church in Galax, VA on Saturday, May 10th at noon. Visitation with the family will be immediately prior at 11:00 a.m. to 12:00pm in the church sanctuary. Interment will follow in the Snow Hill Cemetery. A memorial service will also be held at Tequesta Terrace at a later date. Mom always loved flowers, or memorial donations can be made to The Washington Center School for Special Needs Children in Greenville SC ,where her grandson Tommy attends, would also be appreciated. The family would like to thank the caregivers and staff of Tequesta Terrace for the loving care provided to Mom.
We love you and will miss you Mom. Thank you for everything – for teaching us about faith in God, about being a survivor in hard times, about keeping a sense of humor, but most of all for always letting us know how loved we were and how glad you were to be our mother.