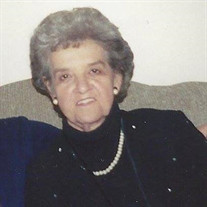 Mary Margaret (Sweeney) Nolen, 79, of Christiansburg, passed away on December 4, 2014. Mary has now found peace and joy, and can now find comfort that her job on earth is done. She was a resolute woman; a hard worker dedicated to her family. Mary will be deeply missed.

She was preceded in death by her parents, Mae Elizabeth Sweeney and Wilton J. Sweeney, three sisters, Eva Mae Hungate, Ester Moore, and Mildred Graham, and her fiancé, Homer Junior Young. Most recently, her eldest son, Warren Lee Nolen, lost his battle with cancer in January.

The family will receive friends from 9 to 11 a.m. on Monday, December 8, 2014 at Horne Funeral Home. The funeral service will follow at 11 a.m. in the funeral home chapel with the Rev. Craig Reed officiating. Interment will follow in Roselawn Memorial Gardens.