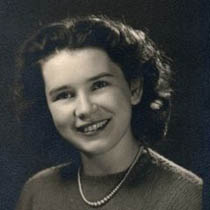 Polly Adams Kahle, 88, of Christiansburg, passed away on Wednesday, March 16, 2016. Polly Kahle was born in 1928 to Tone G. Adams and Ada Frantz Adams in Franklin County, Va. She was also preceded in death by her eight siblings, and her husband of 65 years, W. David Kahle.

Polly and David Kahle met at Bridgewater College following his military service in the Pacific during World War II. They married on January 3rd, 1947. After graduation they attended Virginia Tech, during which time Polly worked in “VPI” food services management and earned her masters degree. She started her own home nursery school when they settled in Christiansburg, and after getting all four of her children off to school, she began a 25 year career teaching both first grade and kindergarten at what was then Montgomery County Schools’ Bethel Elementary.

Polly and David were long-time members at Christiansburg Presbyterian Church: an important part of their family’s life. They also built many friendships over the years as “Hokie” tailgaters and through shared interests in cotillion, golf and bridge. Polly loved to travel both in the states and abroad. Playing bridge was something that she relished, and in recent years was quite excited about her earned master points. She particularly enjoyed playing bridge with her friends at the Blacksburg Community Center who helped her along when her short term memory began to slip. The family is so thankful for friends like these, her dear watchful neighbors and her caregivers at Spring Arbor Assisted Living Richmond, who not only took care of her this past year, but showed her such love.

The Kahle family is in the care of Mullins Funeral Home & Crematory in Radford.www.mullinsfuneralhome.com